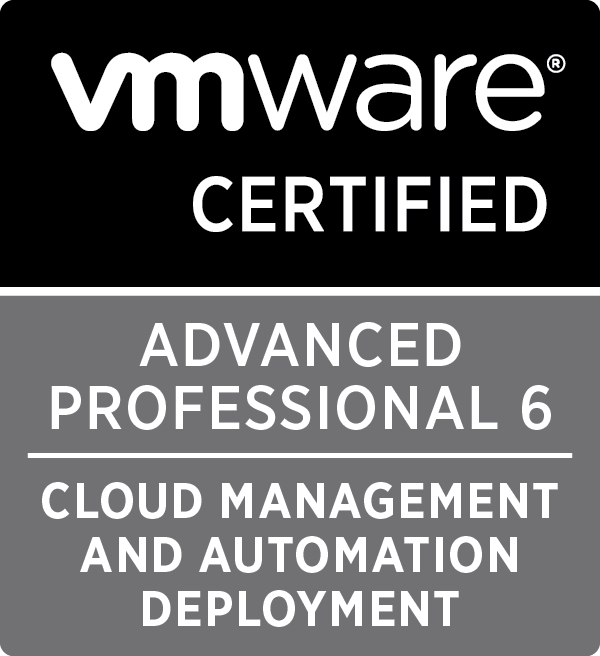 Written by Christopher Lewis on November 4, 2016 .

VMware Education have finally announced the GA of the VCAP6-CMA Deploy Exam. I better get studying! http://blogs.vmware.com/education/2016/11/vcap6-cma-deploy-exam-now-available.html

Two Out of Three Aint Bad

It has been a tense but satisfying couple of weeks for me. I have been waiting on three things, vExpert Announcement and the results from the VCAP6-DCV and VCAP6-CMA Design BETA exams. As you’ll get from the title of the post, I managed two out of three. So that’s vExpert 2016 as well as VMware Advanced Professional 6 - Cloud Management and Automation Design certification. I’m not disheartened about not passing the VCAP6-DCV Design exam afterall I lost one hour out of four in that BETA exam because of the fact the exam kept freezing so it would have been a miracle to have passed it.

On the 26th February (afternoon), I failed at my first attempt to gain my VCAP5-DCD with a score of 279. Beforehand I did say to myself that I would rather have failed hard than nearly get there with a close to passing score. Put simply, I ran out of time. Like most exams i take i go in with a game plan, i’d read a lot on the internet and been told by a lot of people - do the Master and Visio style questions first.

Today I start my journey to obtain my VMware Certified Advanced Professional 5 - Data Center Design certification. I have been designing and supporting VMware products for a lot of years, so I thought it was about time I got my VCAP certifications! Note: Let me just say I realise the VMware Certified Advance Professional 6 - Data Center Virtualization Design is currently in BETA and I will be taking this exam as well.