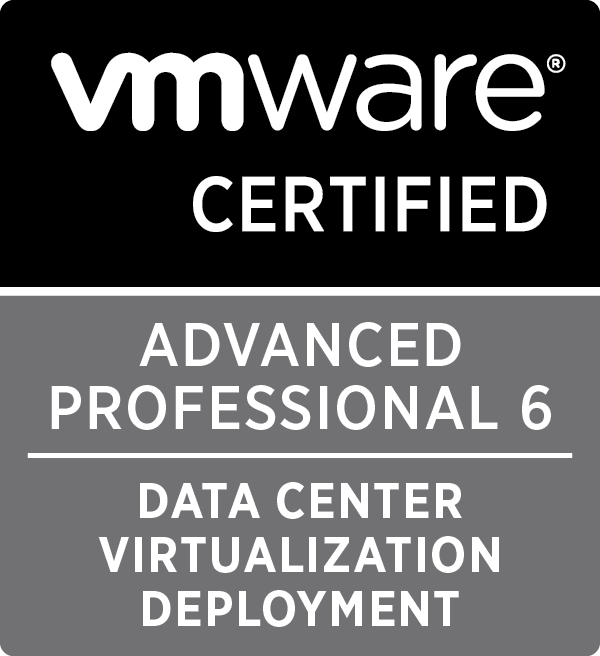 For those of you who read my VMworld EMEA Blog posts, you will know I took my first VCAP Deploy style exam during my visit. This was my first experience of the Deploy style exam and unfortunately I didn’t pass. I’m pleased to announce that after a little bit more study and a lot more exam technique, I passed my resit this morning, so once everything has been updated in VMware’s new Certificate Manager tool, I’ll have my second VCAP6 under my belt in 2016 (having already obtained the VCAP6-CMA Design), and this will mean I’ll be 50% completed on VMware Certified Implementation Expert (VCIX) on both the DCV and CMA track!

At last! As announced at VMworld Europe, VMware vRealize Automation 7.2 has finally arrived! The key updates/features for this release are: Native integration for Microsoft Azure adding to the already supported endpoints of vSphere, KVM, Hyper-V, AWS, OpenStack, vCD and vCloudAir) Native integration with** ServiceNow** and their Service Catalog Container Management! This makes this version of VMware vRealize Automation the first one that could be called a true broker of Hybrid Clouds.

This post is Part 2 of a two part post covering UK VMUG, click here to read Part 1 The only session I attended in the morning was the Community Session, Going Hybrid - using vRealize Automation as a cloud broker for AWS, vCloud Air and Azure given by Sam McGeown. This was a good session overall with Sam going through the differences of deploying the same application to both an on-premises test infrastructure and with Amazon Web Services (no sign of an Azure demo though - but as this is expected in vRealize Automation 7.

I am right now sitting on the train heading back into London with a smile on my face. I’m listening to music (Eye of the Tiger just started playing) and I’m tapping away on my laptop. Why am I smiling? Well it is simple, today was the first time I realised and understood the value of the community. Today was my first UK VMUG it was the first time in a long time I have enjoyed a UK wide conference.

I’m just back in from attending my first @UKVMUG #vCurry evening. I have to say I had a #awesome evening in the tres cool surroundings of the National Motorbike Museum in Birmingham. (cue obligatory screen shots of motorbikes below) It was good to catch up with people i hadn’t seen in a while in the community and even make new acquaintances over rather nice curry with all the trimmings.

If you didn’t already here the news, VMware vSphere 6.5 is now GA. Whilst lots of people will be concentrating on upgrading vSphere 5.x/6.x to 6.5 I’m going to start with the basics… To install the Platform Services Controller using the VMware vCenter Server Appliance (VCSA), you first have to mount the ISO. In Windows 10 this is simple! Installation Steps So first things first, double click on VMware-VCSA-all-6.5.0-<buildnumber>.iso to mount it as a drive on your system.

My first 12 months at Xtravirt

In September 2015, I took a leap of faith. At the time my son had just been born, I had been working for my employer for over 10 years but I didn’t feel valued, either monetarily or professionally. Looking back I will admit, I was too comfortable for too long, it was easy and familiar but I started to realise my career was stalling. There was a glass ceiling between where I was and where I wanted to be.

IT Professionals - Can you have success without sacrifice?

Firstly, let me get something off my chest… My name is Christopher Lewis and I am a Certification Addict. It has been approximately 2 months since my last exam and over the last 15 years I have gained multiple associate, professional and advanced level certifications in Citrix, Microsoft and VMware products. Phew… that feels much better now that the elephant in the room has been addressed. On a more serious note, I feel certifications are a necessary evil in the industry that I have chosen to work in and many of the IT certifications are a good indication of someone’s capability in a topic or technology.

Just over a week until the UK VMUG 2016. This will be my first year in attendance and after a really good VMworld Barcelona I’m looking forward to it. Whilst only a single day (if you excluded the vCurry the night before) I am hoping it will be successful in capturing the essence of VMworld. There seemed to be a big focus on VMware User Group in the VMware EMEA Solution Exchange this year, both around promotion of the “free to join” standard membership and the “pay for” VMUG Advantage membership.

Written by Christopher Lewis on November 7, 2016 .

Written by Christopher Lewis on November 5, 2016 .